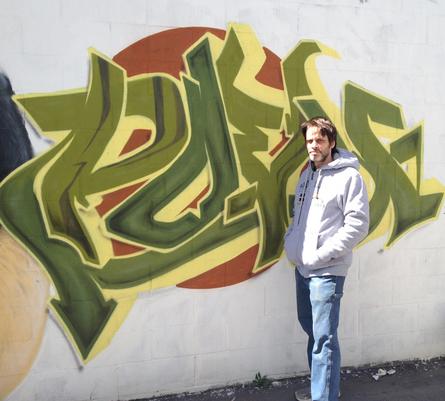 ​Poem One is a graffiti legend who rose to prominence during the 1980s New York City subway art movement.

His rise to fame was sky-rocketed by being featured on the cover of the most influential book ever published on graffiti art, "Subway Art" by Martha Cooper and Henry Chalfant. "Subway Art" is considered by most to be "the bible", which covered the very first generation of spray paint artists of NYC.​

Poem's most known personal work is self-publishing a graffiti art magazine called "Flashbacks". The issue has been around since 1991. The magazine's circulation was on a global scale and influenced a generation of graffiti styles. Today, the New York City based publication is still recognized as one of the first to highlight the world's graffiti subculture, and still continues to be a significant part of graffiti history.

Poem emerged from the street culture to be accepted by the art world for his talent, originality and skills. What sets him apart is his unique approach to lettering. Due to his prolific career in the streets that started in the late seventies, he was able to easily make the transition from street to gallery. It gave him away to preserve his unique style of graffiti and to start a new chapter in his life.

His graffiti style is fluid and continues to be bound to his "graffiti roots", but he does explore areas as diverse as 3D collage art and re-arranged broken up outline pieces in an abstract form. Self-taught, his inspiration comes from sketching and developing his own style.

By using shadows and highlights he creates bright, vibrant 3D effects. His mastery of understanding light and form makes his paintings seem like they are floating. Poem's meticulous attention to detail makes his work very recognizable.  His drawings, paintings are inspired by patterns and centered around contemporary urban culture, street art, and graffiti.